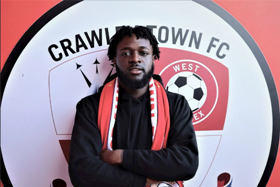 The Anglo-Nigerian striker was signed on a one-year deal with an option to extend for a further year.

Oteh has joined Crawley Town as a free agent after running out of contract at another fourth-tier team Salford City.

The 23-year-old has played for Queens Park Rangers in the past and took in loan spells at Walsall, Bradford City, Stevenage and Colchester United during his time at the Hoops.

Commenting on the signing of Oteh, manager John Yems said: "It’s great to announce the signing of Remi, he’s a great lad that I knew way back from his QPR days.

"He has a lot of EFL experience and now he’s looking for a point to prove and I think he’ll be a great addition to our squad."


Oteh has made 84 appearances in the Football League and has scored eleven goals.
Igho Kingsley
Copyright ANS