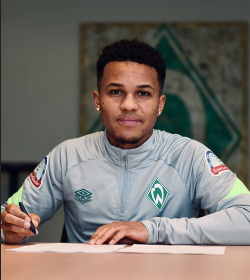 Felix Agu has committed his future to Werder Bremen by signing a contract extension with the German 2.Bundesliga side.
The financial terms and duration of the new contract have not been disclosed by the Green-Whites.
Signed from VfL Osnabruck in the summer of 2020,  he made 15 appearances for Werder Bremen in the Bundesliga, scoring one goal in his maiden season with the club.
In the current season, the 22-year-old has been involved in 15 matches for SVW in the 2.Bundesliga, taking his career appearances in the division to 43.
Speaking on his new deal, Agu said to Werder Bremen's official website : "The club have given me the feeling that I can develop a lot as a player here, and I’d like to play lots of football and put in good performances."
Werder Bremen's head coach Ole Werner added : "The contract extension is confirmation of his development. His performances at the moment are very consistent and I’m convinced that if continues to work hard, he has a bright future at Werder Bremen."
Agu has played non-binding games for Germany at U21 level but is open to representing the Super Eagles.
Igho Kingsley
Photo Credit : werder.de
Copyright ANS