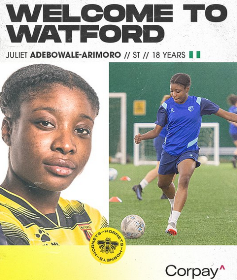 Watford have confirmed via their official website that Juliet Adebowale-Arimoro has joined the Golden Girls on a dual-sign agreement from Brighton & Hove Albion Women.
The 18-year-old was called up to the Falconets squad for the FIFA U20 Women's World Cup qualifier against Congo in December 2021.
Adebowale-Arimoro has yet to debut for Brighton & Hove in the Women's Super League but has made the bench on four occasions this season and invited to train with the first team several times.
Watford have made a move for the promising teenager after her impressive performances in the FA WSL Academy League.
She made her debut for Watford in a 2-0 loss to Lewes at the Orbital Fasteners Stadium on Sunday, February 13, wearing the number 33 at the back of her jersey in the Women's Championship clash.
Adebowale-Arimoro links up with another dual-eligible striker of interest to the Nigeria Football Federation, Adekite Fatuga-Dada at Watford.
She is also eligible to play international football for the United States of America.
Ifeanyi Emmanuel
Copyright ANS