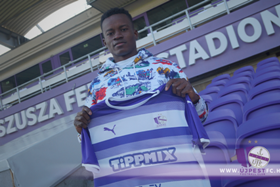 Through their official website, Danish Superliga side Randers have announced that 2021 Super Eagles invitee Vincent Onovo has been loaned out to Hungarian club Ujpest for the remainder of the season.
The defensive midfielder joined Randers in August 2021 from Ujpest, where he spent three and half years.
Onovo has totaled fourteen appearances for Randers in all competitions, including three starts, since his move and he is now returning to his former club in search of regular game time.
"I want to play football and that's the most important thing for me right now. I have been happy to be in Randers, where everyone has been incredibly good to me, and I have learned a lot," Onovo said to Randers official website.
"Now, however, I have been given the opportunity for more playing time in familiar settings, so I look forward to that."
In his first stint at Ujpest, Onovo scored six goals in 127 all-competition appearances while providing six assists.
The former HJK Helsinki and Inter Turku man has been allocated the number 30 jersey at Ujpest.
Ifeanyi Emmanuel
Photo Credit : ujpestfc.hu
Copyright ANS