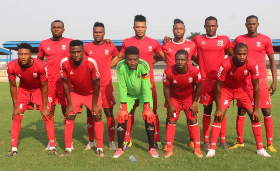 Heartland Management and Imo State Sports Commissioner are at it again. Updates from the camp of the Naze Millionaires say  few players received alert of one month salary 14th February, 2022.
Information from one of the management official says. The other players would have to visit the club office in Owerri  tomorrow 15th Feb 2022 to sign attestation of no indebtedness before they can be paid.
About two weeks ago it was allover the media that the  Imo State Governor Sen. Hope Uzodinma released six months salaries outstanding arrears and bonuses for heartland players.

Also last week the players visited the Sports Commissioner's office where he show them the signed approval of the  six months salaries by the governor.

The question now is why are players being paid one month salary and being forced to sign attestation of no indebtedness despite being owed for up to ten months salaries. Most of the players have objected to signing that form.

Will LMC led by Shehu Dikko keep pampering Heartland due to perceived personal pecuniary benefits at the detriment of the players?


"I can say it without mincing words that what we are passing through in the NPFL is caused by LMC Chairman Mallam Shehu Dikko, I used to respect that man, but the incidents in Heartland have made him lose my respect.
"I am a graduate and I have taken my time to read the league rules. Can LMC quote which part of the rules gave them the backing to extend the date they said Heartland will be sanctioned if they fail to pay?
"It's unfortunate that we are in the hands of politicians running our football, no wonder the commissioner boasted to us that they will not pay and LMC will not do anything."


"I think I need to dust my CV if I'll be able to get a job in Nigeria labour market to take care of myself and immediate family.
"It's terrible and torturing playing professional football in Nigeria, NFF and FIFA are not helping us at all".
Latest News