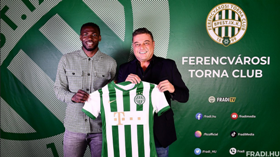 With a statement on their official website, Hungarian giants Ferencvárosi TC have announced the capture of combative PAOK midfielder Anderson Esiti on a permanent deal.
The financial terms and duration of contract Esiti signed with the Green Eagles have not been disclosed by club and player.
Esiti has ended his association with PAOK two and a half years after joining the Greek Super League side from KAA Gent in Belgium.
This season, the 27-year-old has appeared in eight matches in European competition for PAOK including four matches in the group stage of the Europa Conference League.
From 2012-2016, he played in Portugal for Leixões and Estoril, making a combined 102 appearances for both teams with no goal to his name.
The last of Esiti's international caps was in a friendly against Ukraine in September 2019, coming off the bench to replace Alex Iwobi with twenty minutes remaining.
Esiti is the second Nigerian player signed by Ferencvárosi in the winter transfer market after 23-year-old striker Fortune Bassey who was acquired from Dynamo Ceske Budejovice.
Ifeanyi Emmanuel
Photo Credit : fradi.hu
Copyright ANS