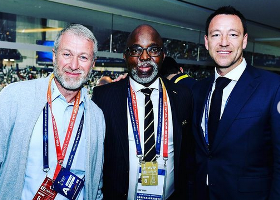 Nigeria Football Federation boss Amaju Pinnick has expressed his elation with the quality of organization of the recently concluded FIFA Club World Cup in Abu Dhabi which Chelsea won for the first time.
The London club who are the European club champions had come close to winning the tournament but lost to Brazilian side Corinthians in 2012 but were deserved winners on Saturday after their victory over another Brazilian club Palmeiras.

Pinnick was in Abu Dhabi where he witnessed some of the games and has took to his Instagram page earlier this week to express his thoughts on the FIFA Club World Cup.

Pinnick finished his comments with a word of appreciation for divine grace.

"Thank God Almighty always for His Love, Mercies and uncommon grace upon our lives."

Desirous to uplift Nigerian football, Pinnick has been in talks with stakeholders in football for sponsorship and partnership opportunities for the national teams.

Pinnick posted his reaction to the FIFA Club World Cup with a picture of himself and the duo of Roman Abramovich and John Terry.

Terry was recently in Nigeria alongside former Brazil left back Roberto Carlos for a publicity event involving an alcoholic beverage company.