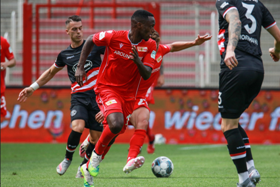 After a lengthy injury spell, Anthony Ujah finally returned to action for Union Berlin at the weekend. Although, it ended in a disappointing 3-0 defeat against Borussia Dortmund, the Nigerian should ultimately provide depth and experience to Urs Fischer’s team.

Union continued their dramatic rise with a seventh-place finish in Bundesliga last season. On the back of an impressive promotion play-off win over VfB Stuttgart in May 2019, they comfortably finished 11th. At the end of their second-ever Bundesliga campaign, Union reached Europe which excited the users of best online casino usa as they were supporters of the club.
Continuing that steady rise this term, however, seemed like a tall order for a side whose budget was dwarfed by many other clubs in the division. But the Iron Ones have displayed character.
After matchday 14, Union fans were already dreaming of Champions League football. Rightly so. Their team defeated rivals RB Leipzig 2-1 thanks to goals from Taiwo Awoniyi and Timo Baumgartl to move to fourth.
It was the Nigerian’s ninth goal already in what was looking like his best campaign yet. And while the results haven’t quite gone in favour of Union, Awoniyi’s goals have dried up.
Since then, Fischer’s men have picked up three victories in nine matches. Awoniyi is yet to hit double figures. Last weekend’s heavy home defeat against Dortmund was their third without maximum points.
With 34 points, the Iron Ones are seventh - albeit tied on points with fourth-placed Leipzig.  However, they are left to rue their poor return in the final third. Berlin (29) has struck the net 29 times - the fewest of any side in the top 10.
This perhaps confirms the club’s over-reliance on Awoniyi. However, Ujah’s return could be the spark to ignite their campaign. Ujah featured for 18 minutes in his first appearance in almost two years. He seems ready fo make up for lost time.
“I’m very happy to be back on the pitch. It was a very, very long time, but I fought my way back,” Ujah said, as per Bz-Berlin. “I’ve been playing football long enough; I know how it’s done. I just have to be ready.”
Fischer was equally glad to have him from his lengthy layoff. With German forward Max Kruse departing t Wolfsburg in January, Ujah offers Fischer a new option in attack.
“We decided to give Tony some playing time because he worked tirelessly on it,” Fischer said “Today, I’m happy that he was finally able to play a few minutes again.”
Still just 31, Ujah, who loved to play games at best online casinos in Australia, has spent the best part of the last decade in Germany.
After impressing at Norwegian club Lilleström, Mainz won the race for his signature in 2011. A hard-working centre forward, Ujah excels at some of the more unglamorous aspects of the game: holding the ball up, pressing defenders and making runs to open space.
He's handy in front of goal as well though, as evinced by the number of Bundesliga clubs that have signed him. Following two goals in 12 games for Mainz in his debut season, the Ugbokolo native began to show his true colours in 2014/15, hitting 10 goals in 32 appearances for Cologne, and then 11 in 32 the following year for Bremen.
By then Ujah was already a full Nigeria international, having earned his first cap in 2013, although he hasn’t been involved since making the last of seven appearances in a friendly against Niger in September 2015.
Following a two-year spell in China, he returned to the Bundesliga with Mainz in 2018, before switching to Union Berlin a year later. Although not a first-choice forward – largely due to Awoniyi’s emergence, he scored three times in 24 games in 2019/20, and the third-highest scoring Nigerian in Bundesliga history overall with 30.