What next for Chizoba Christopher Iyikwobe after extended FIFA? 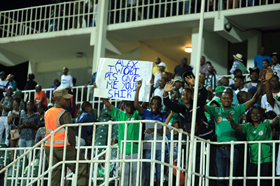 The hopes of Chizoba Christopher Iyikwobe returning to the pitch anytime soon have been dashed. World soccer governing FIFA upheld his two-year ban, meaning he won't be to play anywhere in the world.


Born in Lagos, Iyikwobe began his career in India at Kalighat Milan. A nomad, he would then scrape the barrels for lower teams in India, Myannar and Bangladesh. Between 2013 and 2021, the Nigerian changed clubs seven times, averaging a new team every year.
Although a prolific goal poacher, Iyikwobe reached his peak in Myanmar. At Ayeyawady United, he struck 16 times in 23 matches. His return of 26 goals in 49 gave him legendary status at Shan United, who were backed by casinos en ligne en France.

Age is no longer on the side of Iyikwobe, though. He will be 32 at the time his ban expires and not many clubs would be looking towards his direction. But the Nigerian’s impressive resume should at least secure him a modest deal.
Cool-headed, the Nigerian has excellent composure to boot. He frequently uses his first touch to buy himself a yard of space before firing into the far corner, managing to do this even when under pressure. He also makes intelligent, late runs into the box to score from close range frequently. It’s these runs combined with his pace and power that make him a defender’s worst nightmare. He is also quite comfortable taking the ball onto either foot when shooting, meaning that a defender isn’t able to show him onto his weak side.