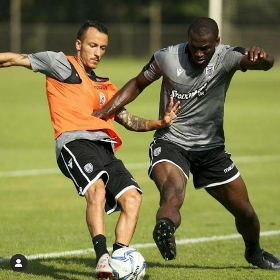 Super Eagles midfielder, Anderson Esiti, has joined Hungarian champions, Ferencváros after a difficult time at PAOK in Greece. The Nigerian can kickstart his career in Budapest and possibly sneak into international reckoning.

When Esiti made his Super Eagles debut against Chad in 2015, he was heralded as Mikel Obi’s successor. Like the former Chelsea star, he was calm, intelligent and calculative on the ball as analysed by best Australian online casinos .

Christened ‘The Rock’ by Gent supporters, Esiti has the ability to win the ball back for his team as well as starting attacks from midfield. His key attributes are his physicality, being strong in aerial duels and his tackling ability.

A natural facilitator, he provided his teammates who have more pace and creativity with the platform to hurt the opposition. Esiti exhibited unique worked ethic and could literally cover the entire pitch.

He is also sensational at recovering possession before moving the ball onto a teammate. Esiti proved to be a good passer with an intimidating presence in the middle.

At that time, he was only 21 on the books of Gent. While Wilfred Ndidi had only secured an amateur contract with rivals, Genk, Esiti was over five years ahead.

With the Leixoes organisation, he played one season for the under 19 side, before eventually being promoted to the first team. He made an immediate impact at senior level, subsequently playing in 45 games for the club.

Having impressed with Leixoes, Esiti attracted the attention of Estoril technical director, who made a bid for the midfielder and signed him in 2014. Esiti spent two seasons at Estoril, featuring in 57 matches for the club. He continued his consistent performances there, establishing himself as one of the best central midfielders in Portugal in the process.

Esiti, who love jeux de casino, moved to Portugal in a deal worth 1.5 million euros having attracted interest from various European organisations. In his second cap for Nigeria, the then youngster slotted alongside his idol in midfiels. Nigeria won 2-1 in Zambia with Esiti a second half replacement for striker Brown Ideye.

“I believe I have come to stay in this team,” a confident Esiti had said. “I had hoped to play at the Rio Olympics but in the end I was not picked. It was great to play with Mikel, who I used to watch on television as a young player coming up”.

Esiti garnered just one more cap since then. While Mikel has retired, the likes of Ndidi has since stepped up. The 27-year-old’s club form jeopardised his national team chances.

The Nigerian’s stock crashed since moving to Greece. Esiti failed to impress coach Razvan Lucescu at PAOK and was forced out on loan last season to Göztepe.

Ferencváros presents a fresh start for the Nigerian. The club said: “FTC have signed 27-year-old defensive midfielder Anderson Esiti. The Nigerian footballer arrives from PAOK Thessaloniki in Greece, where he also played in the Uefa Conference League in the autumn”.