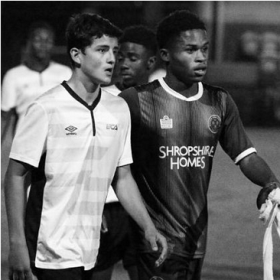 Allnigeriasoccer.com understands that EFL League One club Shrewsbury Town have secured the signature of talented teenager Halim Bakre ahead of next season.

The 2005-born striker has already signed a pre-scholarship deal with The Blues following a successful trial and the effective date of the contract is July 1, 2022.

Shrewsbury Town have pulled off a massive transfer coup to sign the Anglo-Nigerian as he had attracted interest from several clubs higher up the football pyramid in England plus the current Scottish Premiership champions.

He underwent trials with world champions Chelsea, Aston Villa, Middlesbrough and Glasgow Rangers before he was invited for tests with Shrewsbury Town.

Bakre played for the youth team of Brighton & Hove until 2019 when he decided to leave the club because he wanted to be closer to home.

A left winger and striker, he has has been likened to Crystal Palace dazzler Wilfried Zaha.