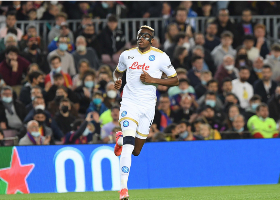 Italian football coach Serse Cosmi singled out Victor Osimhen for criticism following Napoli's 1-1 draw with Barcelona in the first leg of the Europa League knockout round playoff tie at the Camp Nou on Thursday.
The Nigeria international was a surprise inclusion in the starting lineup as there had been doubts about his fitness before the game.
Cosmi is of the opinion that Osimhen had his worst match since joining Napoli and highlighted that he needs to work on the timing of his runs to avoid being offside, especially against teams playing a high line.
Of the 32 players that tasted action, Osimhen was caught offside the most during the contest, three times over the course of 80 minutes he was on parade.
"Against Barcelona Osimhen necessarily had to be among the best in the field and instead I don't know how many times he went offside," Cosmi said to Canale 21.
"There the boy has to improve a lot, a lot because when he plays against a team that has a very high line you have to be careful.
"By doing so you also put your teammates in difficulty because with that movement in depth you allow the insertion of Zielinski and Elmas and instead they never make it because he stretches deeply and the midfielder never has the unloading pass and is forced to do it in vertical.
"Unfortunately with a high line he happens to go offside. It wasn't his best match, in fact in my opinion it was the worst".
Barcelona earned a draw thanks to Ferran Torres who leveled from the penalty spot in the 59th minute after Piotr Zielinski's first half opener.
Igho Kingsley
Photo Credit : sscnapoli.it
Copyright ANS