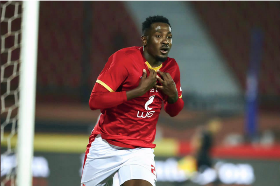 Fringe Super Eagles striker Junior Ajayi has ended speculation about his future after making a surprise switch to Libyan Premier League club Al-Nasr Benghazi.
Through their official social media account, Al-Nasr Benghazi, one of Libya's well known clubs, have announced the capture of the one-cap Nigeria international without disclosing the length of contract.
It is noteworthy that Ajayi terminated his contract with African super club Al Ahly by mutual consent in December 2021.
During his five-year association with Al Ahly, he appeared in 161 official matches, scoring 40 goals and providing 30 assists.
Ajayi scored 30 of his 40 goals for Al Ahly in the Egyptian top-flight, making him sixteenth in the ranking of foreign scorers in the history of the competition.
A member of the Nigeria squad to the 2016 Olympic Games, he had stops at 36 Lion and Club Sportif Sfaxien in Tunisia before joining Al Ahly.
Igho Kingsley
Copyright ANS