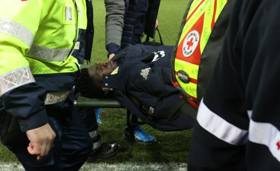 Belgian First Division A club RSC Charleroi have given a reassuring update on Valentine Ozornwafor after the central defender lost consciousness twice on the pitch during their 3-0 loss to Royale Union Saint Gilloise on Saturday night.
The Nigeria international had to be stretchered off the pitch in the 46th minute after he took a hit in the face from RUSG striker Dante Vanzeir.
Ozornwafor fell down on the turf with his hands on his face for few minutes before he was substituted while Vanzeir was rightly sent off by the referee.
RSC Charleroi reported shortly after the game at Stade du Pays de Charleroi that everything is fine with the Galatasaray loanee but he is to remain under observation.
"The first news about our defender Valentine Ozornwafor is reassuring. After losing consciousness twice in the field, he is now conscious and will remain under observation, according to the concussion protocol," Charleroi posted on Twitter.
Ozornwafor had gone the distance in five consecutive matches in the division before the visit of table toppers Royale Union Saint Gilloise.
The 22-year-old center-back has been capped by Nigeria at U20, U23 and senior levels.
Igho Kingsley
Copyright ANS