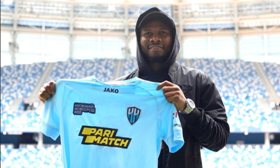 Igboun has joined FC Nizhny Novgorod on a free transfer after mutually terminating his contract with Dynamo Moscow.

Born in Lagos 31 years ago, he began his career at FC Ebedei before transferring to partner club FC Midtjylland in Denmark.

Since 2015, he has been playing in the Russian Premier League, first wearing the colours of FC Ufa, from where he moved to Dynamo Moscow in 2019.


Sly has 155 appearances under his belt in the Russian Premier League, scoring 28 goals while providing eleven assists.
Among Nigerians to have played in the Russian Premier League, only CSKA Moscow legend Ahmed Musa (48) has scored more goals that Igboun.
Igboun, who has signed a contract with FC Nizhny Novgorod until May 31, 2022, has been allocated the number 44 jersey for the remainder of the season.
Ifeanyi Emmanuel
Photo Credit : fcnn.ru
Copyright ANS