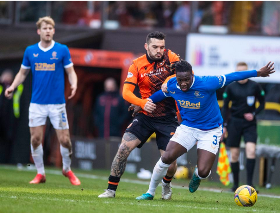 Rangers fullback Calvin Bassey has been named in the Scottish Premiership Team of the Week by football statistics website Whoscored.com following the conclusion of the latest round of matches in the division.
The 2021 Super Eagles invitee was impressive as Rangers were forced to a 1-1 draw by Dundee United at Tannadice Park on Sunday afternoon.
The champions were staring defeat in the face after Ross Graham had given Dundee United the lead in the 29th minute but Joe Aribo snatched a point for the visitors when he powered the ball into the net after Bassey's cut back in the 76th minute.
Bassey has forced his way into Rangers starting lineup in 2021-2022, profiting from the absence of Leon Balogun who has been in and out of the squad due to injuries.
Hibernian, Rangers, Dundee United, St Johnstone, Celtic and Livingston are the teams represented in the Team of the Week, with Bassey and teammate James Tavernier deployed at left-back and right-back respectively.
Against Dundee United, Bassey completed three take-ons, was accurate in 88 percent of his passes, registered two tackles, won a joint game-high two fouls and made one key pass.
Igho Kingsley
Photo Credit : rangers.co.uk