Subscribe
Gernot Rohr to get in touch with Super Eagles defender who lost consciousness on the pitch
Published: February 22, 2022 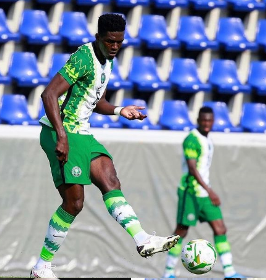 Gernot Rohr was surprised to hear that his former pupil Valentine Ozornwafor lost consciousness twice on the pitch during RSC Charleroi's 3-0 defeat to Royale Union Saint Gilloise on Saturday night.
The former Nigeria coach has promised to get in touch with Ozornwafor to express his sympathy after the unfortunate incident that saw the central defender stretchered off just before the end of the first half.
Rohr has close ties with Ozornwafor's agency, DW Sports Management and handed him a call-up for a friendly against Egypt in March 2019.
The former Enyimba star made his senior debut off the bench against Cameroon on June 4, 2021 and four days later, was one of the standout players in a goalless draw with the Indomitable Lions.
"I'm going to hear from him directly. It's unfortunate. Valentine is an adorable boy. He is a man of integrity with undeniable human qualities," Rohr told Belgian newspaper L'Avenir.
Ozornwafor's last squad involvement for the Super Eagles was in their 2022 World Cup qualifier against Cape Verde five months ago.
Ifeanyi Emmanuel
Copyright ANS