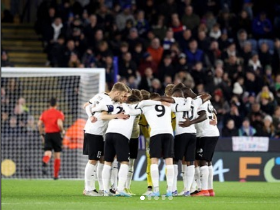 Manchester United academy product Tosin Kehinde has revealed that nobody in his family supports Leicester City ahead of Randers' Europa Conference League tie against the former Premier League champions on Thursday, February 24.
When Randers made the trip to the King Power Stadium for the first leg, it represented a return to familiar surroundings for Kehinde who had a seven-year spell in the Manchester United academy.
The Europa Conference League knockout round playoff clash against the Foxes was arguably the biggest game in the nineteen-year history of the Superliga side.
Members of Kehinde's family, friends and agent were at the King Power Stadium rooting for Randers but the home team made things easier for themselves in the second leg with a 4-1 win.
Randers had an encouraging game in the first half as Kehinde provided the assist for their equaliser just before half time but Leicester came to life in the second half, scoring through Harvey Barnes, Patson Daka and Kiernan Dewsbury-Hall.
Asked if there are Leicester City fans in his family, Kehinde told UEFA media : "No. Definitely no. All of them are supporting us and Randers".
Kehinde had not played competitively for 67 days before the visit to England and he was fatigued in the second half, leading to his substitution in the 76th  minute.
Igho Kingsley
Copyright ANS