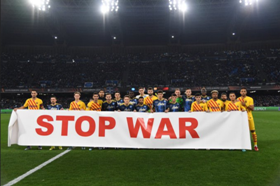 Super Eagles striker Victor Osimhen was lively for Napoli on Thursday night in the second leg of the Europa League knockout round playoff tie between Napoli and Barcelona at the Diego Maradona stadium with Xavi's side winning 4-2.
The first leg ended 1-1 at the Camp Nou and Thursday's game inadvertently saw Napoli eliminated from the competition 5-3 on aggregate.

A quick counter from Barcelona in their own half saw Adama Traore feeding the ball through Jordi Alba who finished with some precision for their first goal of the night.

The Blaugrana doubled their lead soon afterwards as former Man City forward Ferran Torres produced an unorthodox back heel to Frankie de Jong who found the top right corner in the 13th minute.

Osimhen was caught offside in the 15th minute as he bore down on goal.

The Nigerian striker was brought down inside the penalty box in the 21st minute by Barca keeper Ter Stergen but it required the attention of the VAR for the penalty to be awarded which was dispatched by Lorenzo Insigne.

Barcelona were presented with some chances to inflict more damage to their Italian opponents and their pressure eventually paid off when Gerrard Pique turned home the ball to restore their two-goal advantage on the stroke of halftime.

Former Arsenal striker Pierre-Emerick Aubameyang made it 4-1 and well beyond Napoli just before the hour mark.

Osimhen went close to reducing the arrears with 70 minutes played. He evaded Pique's close marking but his near effort missed target by whiskers.

Matteo Politano grabbed a goal for the Italians with three minutes left on the clock but it finished 4-2 on the night with Barcelona going through to the round of 16 stages.