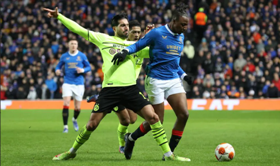 Calvin Bassey and Super Eagles duo of Joe Aribo and Leon Balogun were all in action for Scottish Premiership side Glasgow Rangers Thursday night in their Europa League knockout round playoff match against Borussia Dortmund at Ibrox Stadium.

Rangers defeated Dortmund 4-2 in an exhilarating first leg but the return leg ended 2-2 which sees Giovanni van Bronckhorst's side advance to the round of 16.

Rangers manager opted for exactly the same starting XI as the first leg meaning Nigeria internationals Joe Aribo and Calvin Bassey retained their places while back-to-fitness Leon Balogun came off the bench at half time to replace Borna Barisic.

It was an end-to-end first half of football with Rangers taking the lead against the run of play with captain James Tavernier's penalty, but Dortmund hit back immediately after a smart finish from Jude Bellingham.

The visitors then went ahead on the night as Donyell Malen slotted home from close range in the 42nd minute and had further chances to go level on aggregate.