Subscribe
'We've not seen the best of him' - Rangers coach complimentary of Bassey after display vs Dortmund
Published: February 25, 2022 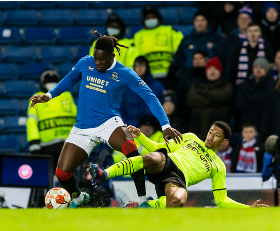 Rangers manager  Giovanni van Bronckhorst was complimentary of Calvin Bassey after the Scottish champions qualified for the last sixteen of the Europa League following their 6-4 aggregate win over Borussia Dortmund.
With Rangers trailing 2-1 on the night, the Dutchman made a tactical change at halftime, bringing on Leon Balogun to replace Borna Barisic and he also changed the system with Bassey moving to the left wing-back position.
And the decision paid off with Bassey providing the assist for Rangers' equaliser in the 57th minute when he swung in a cross and James Tavernier smashed the ball home.
The 2021 Super Eagles invitee has played in a variety of positions this season including central defender, left-back and wing-back.
Van Bronckhorst believes Bassey can reach his top form and praised the Nigerian for his versatility and willingness to learn.
Asked to sum up the contribution of Bassey over the two legs, Van Bronckhorst told reporters at the post-match press conference : "He's very dynamic, he's very versatile because he can play as a center back, it's not his natural position but I think his development in that position is very good.

"He can play left back, he's strong, he's fast. The most important thing he wants to learn, he wants to be better, every training session he comes with a lot of questions.

"I think we have not seen the best of him, he can still improve and become better but he's giving me a lot of options to play him and his contribution is amazing.

"Today he started as a center back, he switched to the wing-back position, my left wing-back gets the cross in and my right wing-back scored the goal. It's amazing how they did it today."
After his latest appearance against Borussia Dortmund, Bassey is now three games away from reaching a 50-game milestone for Rangers.
Ifeanyi Emmanuel
Photo Credit : rangers.co.uk
Copyright ANS