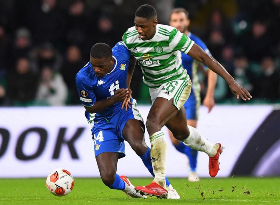 Celtic loanee Osaze Urhoghide redeemed himself with a brilliant display for KV Oostende in their goalless draw with Sint-Truidense VV in a Belgian First Division A clash at Diaz Arena on Saturday evening.
The 2019 Nigeria U23 invitee came in for criticism after an indifferent showing on his league debut against KV Mechelen, a game that saw him replaced at halftime.
It can be argued that Urhoghide struggled in his maiden appearance for KVO because he didn't arrive the club in the best of conditions coupled with the fact that he was playing an unfamiliar role at right wing-back.
Prior to his loan switch to the Belgian club in the January transfer window, he'd made only one appearance for the Hoops in all competitions, against Real Betis in the Europa League back in December.
Against Sint-Truidense VV, the 21-year-old completed a game-high three take-ons, made a game-high 67 passes and registered a team-high three clearances.
Urhoghide is expected to return to Celtic ahead of the start of the 2022-2023 campaign to fight for a first team shirt.
Ifeanyi Emmanuel
Copyright ANS