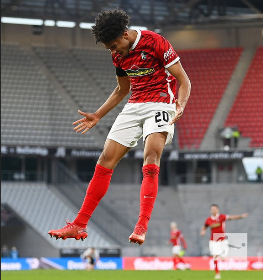 Germany U21 international of Nigerian descent Kevin Schade was among the scorers as SC Freiburg claimed a comfortable 3-0 win over Hertha Berlin in the latest round of matches in the German Bundesliga.
Schade made an impact after coming off the bench in the 64th minute, scoring Freiburg's second goal with seven minutes left on the clock.
The capital club were still in the game until Schade was the first to pounce on a loose ball inside the area and tucked home for his fourth Bundesliga goal of the season.
The 20-year-old's other goals came in his last eleven matches in the division, against Borussia Monchengladbach, Bayer Leverkusen and VfB Stuttgart.
A winger by trade, he made his Bundesliga debut off the bench against Borussia Dortmund back in August and his full debut was against FSV Mainz the following month.
Capped by Germany at U18, U19, U20 and U21 levels, Schade is eligible to represent the Super Eagles through his Nigerian father and Germany because he was born in the country and has a German mother.
Along with Bayern Munich's Alphonso Davies, the German-Nigerian is the second-fastest player in the Bundesliga this season with a maximum speed of 36.37 km/h.
Ifeanyi Emmanuel
Photo Credit : bundesliga.com