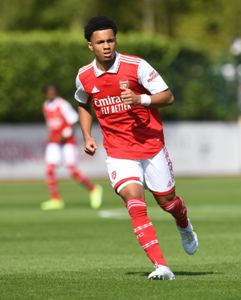 Arsenal U18 coach Dan Micciche has praised Ethan Nwaneri following his impressive performance in a 4-2 win over Reading in an U18 Premier League fixture on Saturday.

Making only his second appearance for the age group, the Anglo-Nigerian starlet provided the assists for the goals scored by Mathaeus Roberts in the first half.

Nwaneri has already been identified as a player with potential so much so that he's already playing up his age group for both Arsenal and the Young Lions.

Micciche says the attacking midfielder will be disappointed that he did not find the net against the Royals and also namechecked goalkeeper Brian Okonkwo among the talented Hale Enders.

Speaking to Arsenal Player post-match on Saturday, Micciche stated : "He's someone very highly thought of here as there are other boys at Hale End as well.

"We have Omari Benjamin and Brian with us. Particularly at this stage of the season you want to start to integrate those boys more.

"Ethan and Omari in particular have both played international football of late, they can play the year up internationally.

"What's great about these boys is that their feet is firmly on the ground, they trained with us yesterday, excellent application and we trust them.

"I trusted him to perform today and he got two assists. Knowing him he will leave here disappointed that he has not scored a goal or he's misplaced a few passes because he's got that champion mentality. Really pleased for him."

Nwaneri made a scoring debut for Arsenal U18s in the same fixture during the 2020-2021 season.