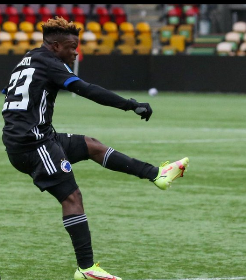 In what was his first squad involvement in a competitive match for Danish Superliga giants FC Copenhagen, Akinkunmi Amoo made his debut off the bench in a 3-0 rout of Randers.
Randers had in their starting lineup fringe Super Eagles striker Stephen Odey and ex-Nigeria U23 invitee Tosin Kehinde with the latter in action for 83 minutes and the former playing the full game.
Wearing the number 23 at the back of his jersey, FC Copenhagen's x-factor signing of the January transfer window, Amoo hopped off the bench in the 87th minute as a replacement for Jens Stage.
The 2019 FIFA U17 World Cup star had been inactive for exactly three months prior to his maiden appearance for FCK, with his last minutes earned in an Allsvenskan clash against Kalmar on December 4, 2021.
Amoo had been lacking match fitness when he signed for FC Copenhagen having missed a large part of pre-season training at Hammarby, so he's being gradually introduced into the first team of his new employers.
The 19-year-old played for FC Copenhagen Reserves in a 3-0 loss to FCN Reserves on February 21.
FC Copenhagen returned to the top of the standings courtesy of goals from Peter Ankersen, Roony Bardghji and Lukas Lerager.
Ifeanyi Emmanuel
Copyright ANS