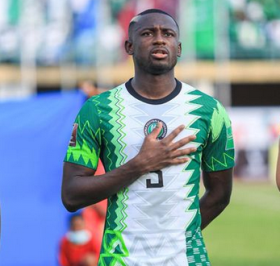 It was level at the interval as Fiete Arp cancelled out Ron Schallenberg's effort but the goals flowed in the second half.

The home team found themselves three goals down as a result of goals from Maximilian Thalhammer, Florent Muslija and Collins with fourteen minutes to go.

Alexander Mühling with a penalty made it 4-2 in the 81st minute and Benedikt Pichler further reduced the deficit on 88 minutes to set up a nervy finish to the game in which Paderborn were able to hold on to victory.

Collins' strike against Holstein-Stadion was his first in Paderborn's colours in 888 days, since finding the net against Bayern Munich on September 28, 2019.

An ever-present in the Super Eagles team during the 2022 World Cup qualifiers second round, the former Rijeka fullback was named on the reserve roster for the upcoming 2022 World Cup playoff matches against Ghana due to his lack of game time at Paderborn and the recall of Rangers rising star Calvin Bassey.


Collins has not been playing much for Paderborn amid uncertainty over his future with his contract expiring on June 30, 2022.
Ifeanyi Emmanuel
Copyright ANS