Osimhen or Vlahovic? Inter Milan legend Vieri reveals who he thinks is the better striker 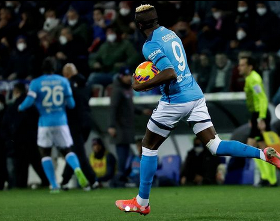 Legendary Italy and Inter Milan striker Christian Vieri has revealed who he thinks is the better striker between Victor Osimhen and Juventus winter signing Dušan Vlahovic.

In the biggest game of the season so far, Osimhen went the distance at the Stadio Diego Armando Maradona on Sunday night as Napoli were beaten 1-0 by Fikayo Tomori's AC Milan.

Osimhen and Vlahovic, who are about the same age, along with AS Roma's Tammy Abraham are widely regarded as the best young strikers in the Italian top-flight.

Vieri has highlighted that the Serbian is a better player than the Napoli number 9 because he is more prolific in front of goal than the Nigeria international.

Vlahovic has been in blistering form this season with 24 goals combined for Fiorentina and Juventus and finished the 2020-2021 campaign with 21 goals, whereas Osimhen has tallied 21 goals in more than one and a half seasons as a Napoli player.

Speaking during the broadcast of Napoli vs Milan, Vieri said on DAZN : "They are both strong, but I would take Vlahovic. Dusan scores more goals than the Nigerian right now.

Former Crystal Palace forward Nicola Ventola agreed with Vieri : "I too would choose Vlahovic between the two. If I could, I would take them both".


On the international stage, Osimhen and Vlahovic scored four goals each in 2022 World Cup qualifying, but the Serbian played two games more than the Super Eagle.
Ifeanyi Emmanuel
Copyright ANS