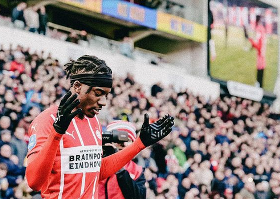 PSV Eindhoven rising star Nonso Madueke and Swansea City striker Michael Obafemi have been named in the Team of the Week for the Dutch Eredivisie and EFL Championship respectively by football statistics website Whoscored.

Madueke, who started the season on fire but slowed down due to a muscle injury, assisted PSV register a 3-1 win over Heracles Almelo, setting up the opening goal scored by Joey Veerman.

In 58 minutes of action, the England U21 international of Nigerian descent registered a game-high six shots with four of them on target, made two key passes and was accurate in 94.3 percent of his passes while winning one aerial duel.

Madueke was the top dribbler with six take-ons completed and made one interception.


One-cap Republic of Ireland international Obafemi, who has been eligible to represent the Super Eagles since November 19, 2021, has been recognized after notching a brace for Swansea City in a 3-1 home win over Coventry City.
Obafemi played two shots with both ending up in the net, made two key passes, had a passing accuracy of 100 percent and touched the ball fifteen times.
Rated at 8.7, the former Southampton youth teamer has been deployed as one of the two strikers in the Championship Team of the Week.
Ifeanyi Emmanuel
Photo Credit : psv.nl
Copyright ANS