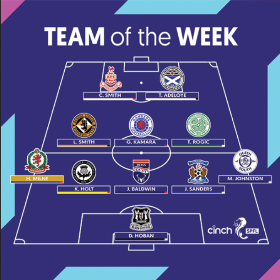 Craig Fowler from A View From The Terrace has published his Team of the Week on the official website of the Scottish Professional Football League with one Nigeria-eligible player making the cut.
Eleven different clubs are represented in the Team of the Week namely Elgin City, Queen of the South, Kilmarnock, Ross County, Partick Thistle, Cove Rangers, Celtic, Glasgow Rangers, Dundee United, Ayr United and Airdrieonians.
2016 Nigeria U23 invitee Tomi Adeloye has cracked the Team of the Week after his outstanding performance in Ayr United's 4-0 rout of Raith Rovers in the latest round of matches in the Scottish Championship.
Explaining why Adeloye was chosen in the TOTW, Fowler wrote : "The striker scored once and played a role in all four goals as Ayr United posted the most eye-catching result of the lower-league weekend as they went to promotion hopefuls Raith Rovers and hammered them 4-0."
In a 5-3-2 formation, the Anglo-Nigerian has been deployed as one of the two strikers.
The 26-year-old Adeloye has tallied 12 goals from 31 appearances in all competitions so far this season.
He joined Ayr United last summer on a one-year contract after turning down a new deal at Barnet.
Ifeanyi Emanuel
Copyright ANS