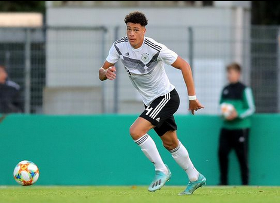 The Nigeria Football Federation have reportedly reignited their interest in talented Hamburg central defender Jonas David.
The 22-year-old is provisionally cap-tied to his country of birth, Germany, having played competitive matches for their U19 national team during the 2019 U19 Euro qualifiers, and has also represented the European giants at U20 level.
According to respected German newspaper, Hamburger Morgenpost, David is a candidate for the Super Eagles and Baba Abdulrahaman, who claims to represent the Nigerian Federation, monitored the defender in training this past week.
The name, Abdulrahaman does not ring a bell, so allnigeriasoccer.com contacted several Nigeria Football Federation staff and they clarified that he used to work for Paul Aigbogun and it is unclear at this point if he was sent by the former Flying Eagles coach, who now works in the technical department of the NFF.
Born in Hamburg, David is eligible to wear the colours of the Super Eagles through his Nigerian father as well as Germany through his mother and holding the citizenship of the country.
David was a player of interest to Aigbogun before the 2019 Fifa U20 World Cup and attempted to include him in his squad for the tournament in Poland but was unsuccessful.
Former Nigeria manager Gernot Rohr, a respected figure in German football, also contacted David to switch his allegiance to the Super Eagles even though he was playing for Germany U19s at the time.
Hamburg higher-ups blocked David from linking up with the Nigeria U20 squad because the player would have missed the final games of the 2018-2019 season due to the tournament.
This season, the German-Nigerian has been involved in eighteen matches in all competitions for Hamburg, scoring one goal in the DFB Pokal.
Nigeria are believed to be scouring Europe for central defenders with Rangers ace Leon Balogun and Leganes' Kenneth Omeruo not getting any younger, while William Troost-Ekong and Chidozie Awaziem are struggling for games at their respective clubs.
Ifeanyi Emmanuel
Photo Credit : dfb.de
Copyright ANS