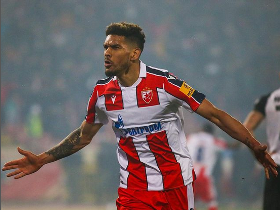 Red Star Belgrade coach Dejan Stankovic has revealed that Norwegian-Nigerian attacker  Ohi Omoijuanfo is now the club's penalty taker ahead of the Europa League round of 16 clash against Glasgow Rangers on Thursday.
Penalty duties have been reassigned after Aleksandar Katai missed from the spot against the Light Blues at Ibrox Stadium.
Red Star Belgrade were awarded a penalty midway through the first half after Ryan Jack fouled Mirko Ivanić but goalkeeper McGregor made a superb save to deny Katai from reducing the deficit.
"Ohi will kick penalties," Stankovic was quoted as saying by Nogomania.
"If our penalty rate is at 50 percent, that’s a serious ailment, imagine what the statistical problems are.

"I hope that in the future our players will be calmer.

"They should calmly come to the ball and score a goal, so Ohi will now take penalties"
Ohi has scored five goals in a Red Star Belgrade jersey since joining the club in January with none coming from the spot.
Ifeanyi Emmanuel
Copyright ANS