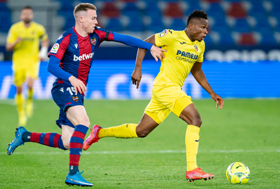 Radio Vila-Real pundit Victor Manuel Rubio Poveda has highlighted one of the main attributes of Samuel Chukwueze before Villarreal's UEFA Champions League round of 16 clash with Juventus at Allianz Stadium, Torino, saying the Nigeria international likes having plenty of space on the wing to operate.
Most people see Juventus as favorites heading into tonight's fixture having held the Yellow Submarine to a 1-1 draw in the first leg in Spain around three weeks ago.
Villarreal manager Unai Emery could deploy the left-footed Chukwueze as an inverted winger with another Nigerian-born player in Arnaut Danjuma operating on the other flank, where he has wreaked havoc this season.
Asked to comment on the Italian opponent that best suits the characteristics of the Europa League holders, Poveda said to Tutto Juve : "I think Villarreal is better off facing a team like Atalanta, because in that kind of games without control they have always managed to obtain excellent results.
"I think last year in comparison with Salzburg, or in this year's group. against Young Boys.
"Both Danjuma and Chukwueze play better with wide spaces and Juve's well-sealed defense leaves very little space. "
Despite missing the first two months of the season due to injury, Chukwueze has been involved in seven goals in 24 matches across all competitions so far in 2021-2022.
Ifeanyi Emmanuel
Copyright ANS