UCL : Chukwueze comes off the bench for Villarreal in shock 3-0 win over Juventus 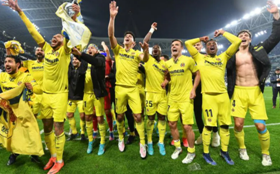 Samuel Chukwueze came off the bench for the last twenty five minutes as Europa League holders Villarreal humiliated Juventus at the Allianz Stadium on Wednesday night, scoring three goals without reply to book their place in the quarterfinals of the UEFA Champions League.
After a goalless first half, manager Unai Emery introduced his Nigerian winger to add more spark to his attack.
The Bianconeri were the better team in the first half and could have been ahead but Dusan Vlahović saw his effort hit the woodwork in the 21st minute.
With the introduction of Chukwueze, the Spanish tactician set up his team in a 4-3-3 formation and the Super Eagles star was given the license to operate on the right wing.
Twelve minutes to the end of the game, Gerard Moreno converted a spot kick awarded after Juventus defender Daniele Rugani brought down Francis Coquelin in the area.
Pau Torres took advantage of some poor defending to double the advantage in the 85th minute and there was more to come when Nigerian-born Netherlands international Danjuma made it 3-0 from the spot after Matthijs de Ligt handled the ball in the area.
Villarreal have won their last three away matches in the Champions League with Chukwueze taking part in two, against Young Boys and Juventus.
Igho Kingsley
Photo Credit : uefa.com
Copyright ANS