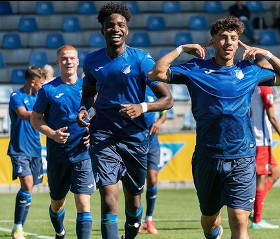 Red-hot Hoffenheim youth teamer Uche Destiny Obiogumu is leaning towards representing Germany at international level rather than Nigeria where he was born, allnigeriasoccer.com reports.
The German Football Association have made the first move to cap him by naming the talented winger on the standby list for their U18s team ahead of international matches against France on March 24th and the Netherlands four days later.
Obioguma has been in imperious form for Hoffenheim U19s in the current season with a goal involvement of 15 (7 goals, 18 assists) in seventeen appearances across all competitions.
Former Super Eagles boss Gernot Rohr had assured Obioguma of an invitation to one of the Nigeria squads after scouting him in an A-Junioren Bundesliga Süd/Südwest fixture between Bayern and Hoffenhein back in October.
The Benin City-born player could be promoted to the main squad of Germany U18s if there are any withdrawals before the two friendlies.
Another Nigeria-eligible striker in Dynamo Dresden's  Jonathan Akaegbobi is on standby for Germany U16s for international matches against Italy this month.
Bayern Munich's Jamie Lawrence, Borussia Dortmund's Nnamdi Collins and Wolfsburg center back David Odogu have been named in Germany U20, U18 and U16 squads respectively.
Ifeanyi Emmanuel
Copyright ANS