...the complete Nigerian football portal
Subscribe
Nigeria vs Ghana: which of the Black Stars can reach the 2022 World Cup
Published: March 17, 2022 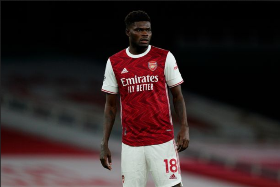 The Nigerian national football team has entered the third qualifying round of the World Cup in Qatar and the Super Eagles are one step away from setting foot on the final round of the most prominent football tournament of the four years. Augustine Eguavoen's side will face Ghana: let's try to find out what to expect from them.

The first leg takes place in Cape Coast on March 25, while the second leg will be played in Abuja on March 29. According to the odds at betting sites in Nigeria, the teams' chances of winning the first leg are almost equal, and the Nigerians are considered the favourites to go through.

Performance at the Africa Cup of Nations (AFCON)

The Ghana team, like the Nigeria team, played at the recent Africa Cup of Nations. The Black Stars came to the tournament as a solid squad capable of, at the very least, making the playoffs. As a result, the Ghanaians unexpectedly failed, scoring only 1 point in their group against Morocco, Gabon and Comoros.

In the opening game of the tournament, the Ghanaian team lost to Morocco (0-1). The Ghana national team led for most of the following match, but 2 minutes before the end of the regular time Jim Allevinah leveled the score and saved a draw for Gabon (1-1). The result of the game didn't look like any trouble as Ghana was to face a modest Comoros side in their final group stage match, but Rajevac's men conceded a goal in the 4th minute, and veteran Andre Ayew was sent off in the 25th minute.

The game ended in a 2-3 defeat for Ghana, with the country's football governing body immediately sacking Serbian coach Milovan Rajevac. Former Borussia defender Otto Addo, who had previously worked as an assistant for the Ghana national team, was appointed as an interim coach. Addo has never worked as a head coach before, so it is unclear what sort of football the Ghanaians will play.

Regardless of their tactical set-up, Ghana has some players who can decide the outcome of an individual match, so Eguavoen's coaching staff will need to keep an eye on them.

The 28-year-old Arsenal defensive midfielder is undoubtedly the main star of this team. The player has featured in every match of his club since the start of February and has even netted a goal and an assist. Whilst in England, the Ghanaian's goals are considered a rarity, Thomas has already netted 12 goals in 34 games for the national side.

At the Africa Cup of Nations, the player has provided two assists: against Gabon and Comoros. Partey is the kind of player who will strengthen Ghana's centre of the pitch and threaten the opponent's side with possible scoring chances.

The Ayew brothers have over 170 games combined in a Black Stars shirt. The older brother Andre was a captain under Rajevac, and despite his respectable age as a player (32), he continues to be a regular contributor to his national team. He has scored 4 goals in his last seven games for the national team, including a goal against Gabon at the AFCON (1-1). For Qatar's Al Sadd, the Ghanaian is scoring even more readily, with 15 goals in 21 Qatar Stars League games this season. Andre, with three goals, is also his team's top scorer in the 2022 World Cup qualifiers.

Jordan Ayew, like Partey, plays in the English Premier League and is fighting for a place in the Crystal Palace squad. The striker has scored one goal for the Magpies and provided three assists in the English Championship this season. Jordan's national team play has been even more modest: his last goal for the Black Stars came against São Tomé and Príncipe last March. But the player recently has featured regularly in the starting line-up as a help to his brother.

The 20-year-old French Rennes winger is the future of Ghanaian football. Kamaldeen has played well for his new team this season, scoring 4 goals and 2 assists in Ligue 1 as well as scoring a goal against Vitesse in the Europa Conference League. The young talent has earned a place in the main squad for his national team and has done the same for his club, but the player picked up an injury in February which forced him to miss five games for Rennes and could miss March's games for his national team.

The left-back for English Championship side Reading is another possible loss for the freshly-appointed Black Stars mentor. Like Sulemana, he has been recovering from an injury since early February and it remains to be seen whether he will be available for the match against Nigeria.

The 27-year-old is the first choice for the left-back position in defence for both his national team and club. He made his debut for the Black Stars in 2014 and has since been almost always in the starting line-up when fit.