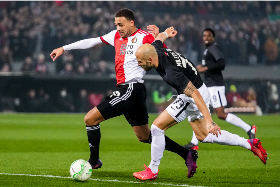 Four Nigeria-eligible players were on target in Europa Conference League matches on Thursday, March 17, helping their respective clubs progress to the last eight in the process.
At Stadion Feijenoord 'De Kuip' in Rotterdam, Feyenoord defeated Partizan Belgrade 3-1 to reach their first European quarterfinal for twenty years.
Super Eagles striker Cyriel Dessers was in the right place at the right time to deflect Toornstra's free-kick into the net in the 45th minute.
In doing so, the Racing Genk loanee became the fourth player to score in five consecutive matches in the Champions League, Europa League or Conference League this season, after Sébastien Haller (7), Best FIFA Men's Player for 2021 Robert Lewandowski (5) and Manchester United superstar Cristiano Ronaldo (5), according to the statisticians at OPTA.
Dessers opened his Europa Conference League account against Taiwo Awoniyi's Union Berlin on matchday four, before scoring in back-to-back matches with Slavia Prague, Maccabi Haifa and Partizan (2).
In a crazy game at Raiffeisen Arena, Slavia Prague lost 4-3 to Austrian opponents LASK with two Nigerian strikers involved in all the goals scored by the Czech side.
With 24 minutes on the clock, Peter Olayinka thumped the ball into the top right corner to open the scoring, Alexander Bah made it 2-1 assisted by Yira Sor in the 37th minute and the ex-Flying Eagles star turned from provider to scorer for Slavia's third, beating two LASK players before sending the ball into the net in the 62nd minute.
Finally, Nonso Madueke wrapped up the scoring in the first minute of second half stoppage time as PSV thrashed FC Copenhagen 4-0 in Parken.
Ifeanyi Emmanuel
Photo Credit : feyenoord.nl
Copyright ANS