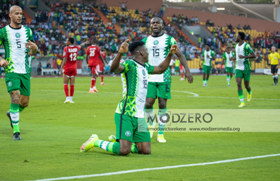 Nigeria international Taiwo Awoniyi was ranked the second fastest player during the German Bundesliga clash between Bayern Munich and Union Berlin on Saturday evening.
The Union Berlin striker was recorded at a speed 34.74km/h during the clash at Allianz Arena, corresponding to the 27th round of matches in the top-flight.
Bayern Munich central defender Dayot Upamecano set the fastest speed at 34.97km/h, with former Manchester City speedstar Leroy Sane in third position at 34.58km/h.
Goals from Kingsley Coman, Tanguy Nianzou and a brace from Robert Lewandowski earned Julian Nagelsmann's team three points.
Sixty two minutes into the contest, Awoniyi was replaced in attack by Voglsammer.
The former Liverpool striker missed at least two good chances to add to his Bundesliga tally; his shot midway through the first half sailed wide of the far post and his rebounded effort from a tight angle was blocked by Hernandez in the 54th minute.
Awoniyi is the joint highest goalscorer for Union Berlin in the history of the Bundesliga with sixteen goals, an honour he shares with former teammate Max Kruse.
Igho Kingsley
Copyright ANS