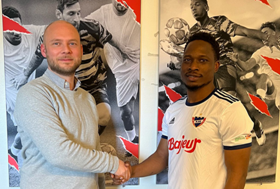 Former Golden Eaglet striker Emmanuel Ogude has returned to Boldklubben af 1893 for a second spell, informs the nine-time Danish champions on their official website.
Ogude has signed a contract with B.93 until June 30, 2023 but has to wait to make his debut for his new employer as he is rehabbing from a cruciate ligament injury.
In his first spell at B.93 from 2015 to 2017, he notched 21 goals in 42 appearances.
On his curriculum vitae, he lists Maccabi Petach Tikva (Israel), Hapoel Ashkelov (Israel), Maccabi Kiryat Gat (Israel), Vendsyssel (Denmark) and Al Tadhamon (Kuwait) as his previous clubs.
Ogude has been described as a physically strong player with an excellent technique with fast feet and a great aerial ability as well as an impressive shooting strength.
Boldklubben af 1893, who compete in the third tier of Danish football, welcome AB to the østerbro Stadion (København) in their next league game on Friday, March 25.
Igho Kingsley
Copyright ANS