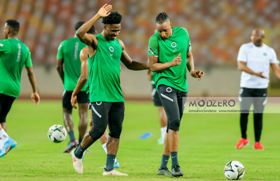 Allnigeriasoccer.com was at the Moshood Abiola National Stadium in Abuja on Wednesday evening to monitor the Super Eagles final training session ahead of their trip to Ghana, even though it was held behind closed doors.
The Super Eagles' third workout since they started preparations for the doubleheader against the Black Stars gave an interesting insight into Augustine Eguavoen's plans for the first leg.
1) Top three performers :  Glasgow Rangers midfielder Joe Aribo, Napoli striker Victor Osimhen and Omonia Nicosia goalkeeper Francis Uzoho were the top three outstanding players in that order.
Aribo showcased his excellent positional awareness and ball control, and had a good range of passing, Osimhen was literally unplayable and the defenders he was up against resulted to foul play to stop him,while Uzoho made a series of brilliant saves.
2) Omeruo and Ajayi center back pairing didn't work out : Eguavoen tested several center back pairings during the workout one of which saw former Chelsea star Kenneth Omeruo partner West Brom ace Semi Ajayi.
Omeruo struggled to say the least when paired with Ajayi, they were porous defensively. However, the 2013 AFCON winner performed slightly better when he was paired with Leon Balogun and William Troost-Ekong.
The 28-year-old is lacking match fitness heading into Friday's fixture with his last appearance for Leganes on February 11.
3) Eguavoen keeps everyone guessing : Even though it was a closed door affair, with only the top echelon of the Nigeria Football Federation allowed to watch the training session, Eguavoen has kept everyone guessing with his tactics and likely starters against Ghana.
The Super Eagles interim coach changed the teams in the 11 vs 11 game more than four times and also tried out different formations.
4) Lookman likely to be on set-piece duties : The Leicester City winger did not show any signs of fatigue or illness during the training session despite landing in Abuja on Wednesday morning.
Should he be involved against Ghana in Kumasi, it appears he has been handed a new role of being the set-piece taker just as was the case during the training session when he took almost all the free-kicks earned by his side.
The 2017 U20 World Cup winner easily converted a penalty awarded after Osimhen was felled by Balogun.
5) Chukwueze scores pick of the goals  : The Villarreal dazzler scored the most eye-catching goal in the training session when he went on a run from near the center circle, beat four opponents and slotted into the net.
Ifeanyi Emmanuel
Copyright ANS