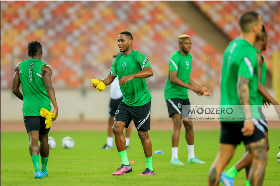 FC Copenhagen attacking midfielder Akinkunmi Amoo has been catching the eye in the training sessions since the start of preparations for the doubleheader against Ghana in the 2022 World Cup playoff.
Aged 19 years and 293 days today, the former Golden Eaglets star is the youngest player named in the Super Eagles' expanded squad list for this month's games.
Allnigeriasoccer.com can authoritatively reveal that senior Super Eagles players such as Ahmed Musa, Odion Ighalo and Kelechi Iheanacho have been left impressed by the performance of Amoo in training.
Moses Simon, Victor Osimhen and Samuel Chukwueze have also given their approval to the former Hammarby wonderkid because of his playing style, having watched and played alongside him in the training sessions.
Amoo was not disappointed to be left out of the matchday squad for the first leg against Ghana as he's aware there are more experienced players ahead of him in manager Augustine Eguavoen's pecking order of wingers and attacking midfielders, coupled with the fact that he was one of the last players to report for international duty.
The Sidos FC product is aiming to force himself into the starting lineup should the Super Eagles qualify for the World Cup in Qatar.
Amoo, who is still age-eligible for the Flying Eagles and Olympic Team, received a first senior call-up on the back of his outstanding displays for Hammarby last year.
Ifeanyi Emmanuel
Copyright ANS