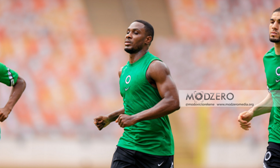 Ahead of Tuesday evening's 2022 World Cup playoff against Ghana at the National Stadium in Abuja, Al Hilal center forward Odion Ighalo has pinpointed three things the Super Eagles must do to defeat their opponents.
Nigeria must win to secure qualification for the tournament in Qatar while a score draw would suffice for the Ghanaians after both teams played out a goalless draw in the first leg in Kumasi three days ago.
Of the twenty five players currently with the Super Eagles, ten including Ighalo were part of the squad to the 2018 World Cup in Russia.
Ighalo has highlighted the importance of playing in the World Cup to the younger players such as Calvin Bassey, Akinkumi Amoo, Victor Osimhen and Samuel Chukwueze.
The former Manchester United striker has identified three things the Super Eagles players need to do to be safely through to the mundial, saying that they have to ensure they perform at their optimum level, convert the chances that come their way and play at a high intensity throughout the game.
"I try to talk to the younger guys that have not been there before that this is an opportunity for us to go to Qatar 2022 because you won't know how it feels now. After your football career you will understand what it means to play in the World Cup," Ighalo said to NFF TV.

"Like I said I have been there before, I know what it is and I'm looking forward by God's grace to go to another one again.

"Home advantage for us but we are not going to go to sleep because it's going to  be a difficult and tough game.

"Ghana are going to come all out here because they have nothing to lose now than to come out because we're playing at home.

"We just have to give our best 110 percent in the game on Tuesday, take our chances, fight from the start to finish till the final whistle.

"I know by God's grace we're going to come out victorious but we have to work hard, it's going to be tough one but we're going to win by God's grace."
Ighalo was not utilized off the bench in the first leg tie at the Baba Yara Stadium, with manager Augustine Eguavoen opting to introduce his wingers rather than his out-and-out strikers.
Ifeanyi Emmanuel
Copyright ANS