Moses Simon vows fans will 'see him in form' vs Ghana, claims he wasn't caged against Tunisia 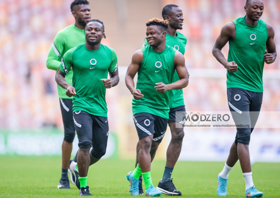 Moses Simon was on media duties on Monday evening ahead of the Super Eagles 2022 World Cup playoff against Ghana, an indication that the Nantes winger is set to keep his place in the starting lineup tomorrow.
The Super Eagles winger is having a fine season at Nantes, scoring three goals and setting up seven others in 24 outings in the French Ligue 1.
Having said that, Simon has been ineffective down the left flank in the last two matches played by the Super Eagles, against Tunisia and Ghana, with the opponents preventing him from wreaking havoc.
The 26-year-old was so anonymous in the recent game against the Black Stars, so much so that it was wrongly thought he was substituted for Emmanuel Dennis on the hour mark.
Asked if he's in perfect condition and how he plans to enjoy himself tomorrow, Simon answered : "Of course you'll see me in form in tomorrow's game.
"It's not all about me, it's all about the team and team spirit. We know what it takes for this game and we'll give everything."
He added : "The game against Tunisia I was not caged, if you say I was caged I didn't observe it and you talk about the game against Ghana it is tactics because we all know it can be difficult.

"We know how Ghana play so we decided to play for a draw because we know when they come here they will lose."
Simon is one of two players to have started every single game played by the Super Eagles in 2022 World Cup qualifying along with Napoli striker Victor Osimhen.
Ifeanyi Emmanuel
Copyright ANS