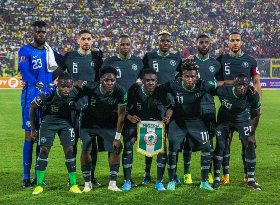 Speaking at the pre-match press conference on Monday evening, Nigeria's caretaker boss Augustine Eguavoen provided a fitness update on Innocent Bonke and Samuel Chukwueze before his side's crucial 2022 World Cup playoff against Ghana at the National Stadium in Abuja.
Bonke, a late replacement for injured Leicester City midfielder Wilfred Ndidi on the Super Eagles 25-man roster, was forced off injured in the 62nd minute of the goalless draw against the Black Stars in Kumasi, three minutes after Chukwueze made way for Emmanuel Dennis.
The Villarreal winger has been unable to train since the team returned to Abuja to begin preparations for the second leg, while the Lorient midfielder sat out Saturday's session but took part in some activities the following day.
Eguavoen will make a final decision on the availability of the two players at 2100 hours on Monday after an update from the Super Eagles medical team.
Asked to provide an update on the fitness of Chukwueze and Bonke, Eguavoen responded : "That's a very interesting one, they are still under observation. Chukwueze had a scan, the result hasn't come.

"Bonke is not participating this evening as well because he had a knock. Our medical team is still working on them, it's 24 hours before the game, we are not going to risk anything.

"I'm expecting a report from the medical team and once they get that to me by 9pm tonight we'll know whether they will be on the pitch tomorrow. We have enough personnel in the team that can do the job."
Eguavoen has very competent players to replace Chukwueze should he fail a fitness test with Ademola Lookman, Ahmed Musa, Emmanuel Dennis and Akinkunmi Amoo capable of playing on the right wing.
Oghenekaro Etebo, Joe Aribo, Frank Onyeka, Semi Ajayi and Abdullahi Shehu are Eguavoen's other options in defensive midfield.
Ifeanyi Emmanuel
Copyright ANS