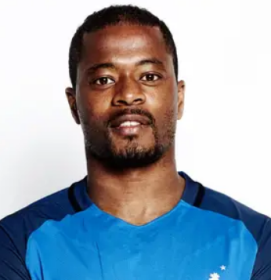 Manchester United legend Patrice Evra was recently in Nigeria for a chess initiative and despite his busy schedule, visited some media houses where he held interviews and talked about his playing career.
Apart from the Red Devils, Evra represented other top clubs in Europe including Juventus, Monaco and Marseille.
The left-back played 379 games for United, between 2006 and 2014, and won the Premier League five times, the League Cup on three occasions, FIFA Club World Cup and Champions League during his time at Old Trafford.
Born in Dakar, Evra was eligible to represent his country of birth, Senegal, Guinea through his father, Cape Verde through his mother and France where he grew up but opted to represent the European giants internationally.
One of the questions posed to him was about the France national team winning the World Cup in 2018 and some people said the squad was not French enough, with the likes of N'Golo Kante, Presnel Kimpembe, Paul Pogba, Kylian Mbappe, Samuel Umtiti, Blaise Matuidi, Steven Nzonzi, Steve Mandanda, Adil Rami, Nabil Fekir, Djibril Sidibé and Benjami Mendy of African descent.
Evra told Arise News' The Morning Show : "That's why I said to all the footballers to pick carefully their national team.

"I was born in Senegal. I could play for Senegal or France, I spoke with my parents.

"I grew up in France, my choice was natural to play for France because you just think about playing with the big players but actually it's just politics.

"Like you said when you win with France you are a French player, when you lose suddenly you get your Senegalese passport, so that's why when you make your decision you have to be really careful on all of that."
Evra made 81 appearances for the French national team and represented them in Euro 2008, 2012 and 2016 plus the 2010 and 2014 World Cups, going the distance against the Super Eagles in a round of sixteen clash in the latter.
Ifeanyi Emmanuel
Photo Credit : fff.fr
Copyright ANS