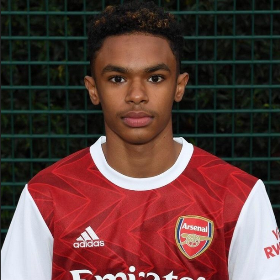 Arsenal wonderkid Ethan Nwaneri enhanced his growing reputation by getting on the scoresheet as the Gunners defeated Southampton 4-2 in the U18 Premier League on Saturday afternoon.
The Anglo-Nigerian is not eligible to sign scholarship forms until July 1, 2023 but is being fast-tracked into the U18 setup whilst still a schoolboy.
Making his third start of the season against the Saints, the attacking midfielder doubled the Gunners lead with a shot from just outside the area.
But the visitors clawed themselves back into the game with a brace from Jimmy Morgan before strikes from
Billy Vigar and Sagoe Junior sealed a win for Arsenal.
Nwaneri was replaced with a minute left on the clock with the outcome of the game all but decided.
He scored on his U18 Premier League debut against Reading last May and bagged two assists against the same opponents in a 4-2 win back in February.
Nwaneri, who is eligible for the Golden Eaglets through his father, has played non-binding games for England at U16 level.
Ifeanyi Emmanuel
Photo Credit : arsenalyouth.wordpress.com
Copyright ANS