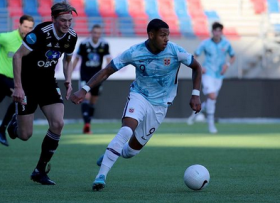 Chelsea-owned striker Bryan Fiabema made his competitive debut for Rosenborg in their opening match of the new Norwegian Eliteserien season against UEFA Europa Conference League surprise package Bodo/Glimt at the Aspmyra Stadion on Sunday night.
Last month, the Norway underage international of Nigerian descent joined the Norwegian giants on a season-long loan with an option to buy him outright from Chelsea included in the deal.
Rosenborg got off to a good start, opening the scoring through Tobias Børkeeiet who slotted home after a loose ball fell to him with a quarter of an hour played.
Pellegrino, from the spot, leveled matters in the 63rd minute and Espejord made it 2-1 at minute 70, before Børkeeiet salvaged a point for the Trondheim outfit with his second of the game fifteen minutes from time.
Wearing the number 29 jersey, Fiabema came on for his Rosenborg debut with two minutes left on the clock as Rosenborg searched for a winner against the reigning champions.
Prior to the trip to Bodo, the Norwegian-Nigerian had not featured in the Eliteserien since July 14, 2019 when he made his professional debut aged 16 years and 148 days.
Fiabema was Chelsea's leading scorer in the Premier League 2 before joining Rosenborg on loan.
Ifeanyi Emmanuel
Copyright ANS