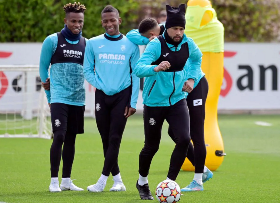 Samuel Chukwueze is in line to make his seventh career UEFA Champions League appearance on Wednesday evening when Villarreal trade tackles with Bayern Munich at the Estadio de la Cerámica.
The official website of UEFA has published images of Villarreal's final training session on Tuesday and the Nigeria international was among the players in attendance.
A minor muscle-related injury had kept him out of the last two games played by club and country, with the winger omitted from the matchday squad for the 2022 World Cup against Ghana, before missing the trip to Levante at the weekend.
Of the three Super Eagles players that participated in the group stage of the Champions League, Chukwueze is now the only player left in the competition.
The 2015 U17 World Cup winner has already racked up 26 appearances in all competitions for Unai Emery's side so far this season and will be aiming to score his second goal in the Champions League against Bayern Munich tonight.
Villarreal knocked out Juventus with a 4-1 aggregate win in the round of 16 with Chukwueze involved in both legs.
But Bayern Munich will be brimming with confidence heading into the fixture as they are unbeaten in their last seven games against Spanish opposition in Europe, winning five and drawing two.
Ifeanyi Emmanuel
Photo Credit : uefa.com
Copyright ANS