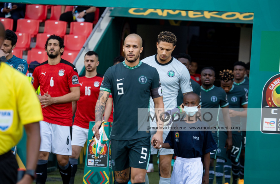 Watford sporting director Cristiano Giaretta has been contacted to respond to speculation linking Super Eagles on-field captain William Troost-Ekong with an imminent move to LA Galaxy.
CBS Sports journalist Roger Gonzalez broke the news that La Galaxy are in talks with Watford over a loan move for Troost-Ekong.
LA Galaxy bolstered their defensive options by signing El Salvador center half Eriq Zavaleta last month and despite his acquisition, they have been linked with former Real Madrid captain Sergio Ramos who is struggling to get games at PSG following his transfer last summer.
Giaretta, who is responsible for incoming and outgoing transfers at Watford, has made it clear that La Galaxy have not yet made an approach for Troost-Ekong.
Asked to confirm reports linking Troost-Ekong with LA Galaxy, Giaretta told allnigeriasoccer.com on Wednesday morning, 0907 hours : "I never received a call from LA Galaxy".
A product of the Tottenham Hotspur academy, the 28-year-old Troost-Ekong joined Watford in 2020 after stops at
Groningen, Dordrecht, Gent, Haugesund, Bursaspor and Udinese.
He has been inactive for the Hornets since going the distance against Tottenham on New Year's Day.
Ifeanyi Emmanuel
Copyright ANS