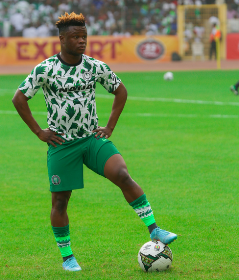 FC Copenhagen head coach Jess Thorup has revealed that Akinkunmi Amoo has had limited playing time due to his lack of physical form and competition in the offensive positions.
Since transferring to FC Copenhagen from Swedish Allsvenskan side Hammarby on January 31, the former Golden Eaglets dazzler has logged only 63 minutes and wasn't named in the matchday squad for the most recent game against Aalborg on Sunday, April 3.
The Sidos Academy product marked his starting debut for the capital outfit by netting the winner in a 1-0 victory over

Nordsjaelland in the last game before the international break.
"He joins the squad and is a little behind the others physically, and there was a backlog we should have built up, " Jess Thorup told Ekstra Bladet after training on Wednesday.
"There are some positions where we have a lot of other talented players, so one thing is that you hope something happens in the short term, but the important thing is that we get to build it up, which is the important thing namely the relationships to the players around them, and we take that very quietly. "
Despite finding game time hard to come by at FCK, Amoo earned his first senior call-up for the March internationals against Ghana but was unable to make his debut for the Super Eagles, with erstwhile Nigeria interim coach Augustine Eguavoen having more experienced wingers at his disposal.
The former Hammarby star is under contract with FC Copenhagen until December 31, 2026.
Ifeanyi Emmanuel
Copyright ANS