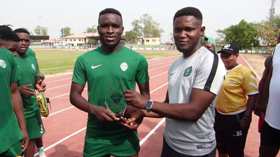 Former Golden Eaglets' assistant coach Bunmi Haruna has lauded striker Emmanuel Ihezuo after he won City FC of Abuja's player of the month for March, 2022.
Ihezuo was in Spain in January where he was scouted by legendary Atletico Madrid manager Diego Simeone, Borussia Dortmund and a host of clubs from Belgium.
Emmanuel has notched nine goals in seven appearances for the promotion-chasing Citizens to help them stay top of group A1 in the Nigeria National League(NNL) ahead of Elkanemi Warriors who are second on the log.

The 21 years old striker was last weekend presented with the club's player of the month award, as voted by club officials and fans despite missing out of the weekend's game against Sokoto United due to injury.

Bunmi who presented the award to the striker on behalf of the club, echoed the popular belief that football talents are abundant in Nigeria and advised the Nigeria Football Federation to look inwards in beefing up the various national teams.

"I have never seen or heard about Emmanuel before, so I was surprised to see a player of his calibre, relatively unknown in a country with a very vibrant media.

"What this points to is that, talents are abundant in Nigeria, all we need to do is fish them out and polish them to international standards.

"To score nine times in seven games in Nigeria's second division when the league is not even halfway through is not a joke. He is simply a diamond in the rough.

"He is a testimony to the fact that this country is blessed and we don't have to depend on foreign-based players all the time, Bunmi who doubles as chairman Sports Writers Association of Nigeria(SWAN) FCT chapter said.

He however advised the bullish striker not to get carried away by his recent successes.

"He should remain focused and not get carried away, because attention will now be on him and he needs to continue to deliver every week for him to get the attention of the national team handlers.